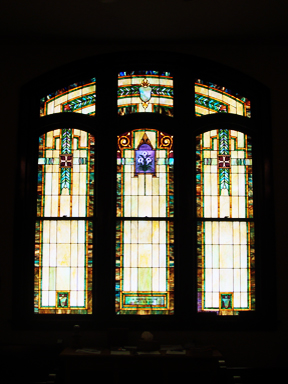 In the early 1870s, two dedicated women, Isabelle Fyffe Deal and Mary Ann Rodgers, were reported to have driven their horse and buggy through the Riverton, Illinois area to drum up enthusiasm for a Methodist Church. Their dream was fulfilled with the founding of the Riverton Methodist Episcopal Church in 1874.

The whole denomination went by the name Methodist Episcopal in those days. The word Episcopal came from the roots of the Methodist movement in the Church of England with John Wesley in the 1700s. That church came to be known on this side of the Atlantic as the Episcopal Church. The Greek word from which we get the word Episcopal means bishop. Churches called Episcopal were led by bishops.

According to our cornerstone [see image to the right], the new Methodist Church had begun to raise its own building by 1877. It was completed the following year. The location of that wood frame building was just north of the present church building, where the SBC building now stands. In 1901, the word "First" was added to the church's name. It was, after all, the first, and only, Methodist church in town.

By 1908 the church had grown enough that an addition and remodeling were needed for the building. The task was extensive enough that the date of the project was added to the cornerstone. The entire structure was lost to fire, however, in 1924. Work was begun almost immediately on its replacement, the present brick building, as the church acquired the present plat of over seven acres. Thus, 2004 was the 130th anniversary of our congregation and the 80th year of our building.

In 1939 the entire denomination was reuinited with two other branches of the Methodist family from which they had been separated since before the Civil War. The recombined denomination called itself simply the Methodist Church. Our local congregation changed its name, dropping the word "Episcopal". They replaced the stained glass window over the doorway that proclaimed the old name with clear glass with "The Methodist Church" etched on it, which still stands over our entryway. The old stained glass was stored away, to be rediscovered around 1990. It was then built into the beautiful wooden case that now graces our chancel.

The church released the land on the corner of Third and Lincoln in 1949 to Clear Lake Township for a memorial park in honor of war veterans from this area. Although the legal paperwork on the transaction was apparently never officially recorded, the township has maintained the property for fifty years, adding monuments to those who served in Korea, Viet Nam, and Desert Storm.

The present parsonage was built in the early 1960s. A formal dedication ceremony was held in 1964, the same year the church celebrated its 90th birthday.

For 135 years we have worshipped and worked here in Riverton, Illinois under a variety of names and in two different buildings. Our primary purpose has always been to serve God and our community. May we be worthy of the rich heritage of sacrifice that has given us what we have. And may we also work with dedication and sacrifice to pass this precious heritage on to future generations.

Our mission is to draw people into relationship with Christ and the church and to lovingly challenge them to spiritual growth.

A warm fellowship of Christians in the Riverton area, growing in numbers and spiritual nurture, with facilities and programs to do ministry in the name of Jesus Christ for generations to come.